It’s embarrassing to confess how relieved I was when my Significant Object suddenly got a small flurry of bids and sold for $15.50, more than seven times its original purchase price of $2.00. I’ve never held the popsicle-stick construction; I’ve never even been in the same state with it.

But because of the story, that .jpg image of a thing found in a thrift shop turned — in my head, anyway — into The Box Anne Cole Made. 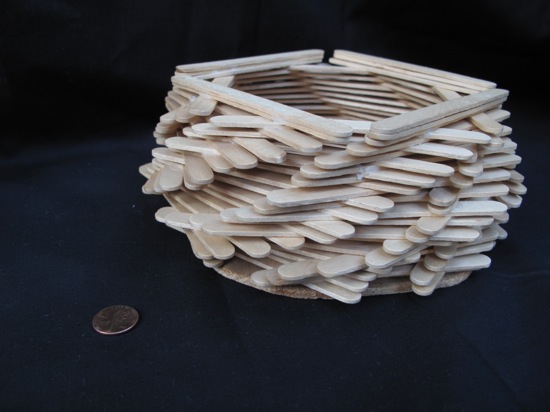 Even though, in the story, Anne ends up wanting nothing more than to get rid of it (sorry, spoiler), I still found myself equating the progress of the object’s auction with the story’s value as a story.

The auction, coincidentally, was happening while I was furiously engaged in getting rid of objects. Books, mostly. Books I’d bought and enjoyed, but was sure I wouldn’t reread. Books I’d been given and enjoyed, ditto. Books from college, with marginal notes growing ever more cryptic with the passage of time. Books I’d bought and did not enjoy, but felt guilty about getting rid of because they were by Important Writers. Books purchased for reference for completed projects. Books purchased for reference that are now obsolete.

What’s the opposite of a hoarder? Whatever it is, that’s what I felt like as I culled. Out, out, out. So much dust. So much cat hair. And every so often, a catch in the throat as I held a book in my hands: If this isn’t on my bookshelf, does that mean I’m not — intellectual, politically engaged, honoring the work of teachers, friends, and colleagues?

I’ve gone through this before, most notably when I decided that being queer did not, in fact, mean that I had to keep every collection of coming-out stories I had acquired on My Personal Journey of Identity. How is it created, the connection between you and your stuff, and what does it mean when you break it?

Found in the basement

The necessity of habituation