It was probably in Cricket. Or maybe I saw it on 3-2-1-Contact! Or, heck, maybe it was a plain old school assignment. Anyway, sometime far Back in that very long conceptual Day, I encountered a Thing that involved telling a robot how to make you a sandwich. You’d write down the steps, and then the interrogation would begin:

Did you tell the robot how to unscrew the peanut butter jar? Or how to identify which jar contains peanut butter? Or where the knife is? Or how to open the silverware drawer? The point of the exercise was to demonstrate how easily you could screw up the seemingly simple task by leaving out essential steps. (And, possibly, to assuage the fears of any of us who might have been worrying about robots taking over the world. Clearly, they weren’t too bright. They had a ways to go.)

When I approach a comics script, I often have that robot in mind. Thinking of the robot helps me to avoid a mistake that’s very common for writers who are new to the comics format: including multiple actions in a single panel description.

But wait, I hear you say, there are, like, ten actions on this Captain America cover! 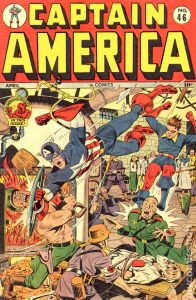 Fair enough. There’s certainly a lot going on. But each character is only performing a single action. It’s just as though Cap & Billy were caught in the middle of giving those Nazis what for by an intrepid photographer — Jimmy Olson, no doubt.

It may seem less so when you’ve started writing your script and you’ve got something like:

He puts the glass in the sink, goes downstairs to the garage, gets into the car and drives away.

It’s a perfectly reasonable (if inelegant) sentence. In comics, though? That is impossible to execute in a single image.

How about a panel for glass-in-the-sink, a panel on the stairs, a panel to open the car door, another to shut it, another to turn the key in the ignition, and you might want to have one with the garage door going up, unless he’s maybe so angry or drunk that he’s just gonna back the car right into it.

But here’s the cool thing: you don’t HAVE to include all of those images as panels. You could, for example, cut right from the glass to him in his car on the highway. Or you could slow it down farther. Maybe you want to show that it’s a struggle for him to make it down the stairs, so you split that up into multiple panels. Or maybe you move in closer to the glass itself, and something’s reflected in it that tells the reader why this guy is then going to get into his car.

What you can’t do is everything all at once.

March 6, 2010 By Sara
Poetic spam, etc. More tips on writing comics: what artists wish you wouldn't do, part one

I suppose I should be grateful

The benefit of a broken iPod