An amazing day, and #yasaves

On Saturday, when #yasaves began to happen in response to the latest installment in the apparently endless series of articles decrying YA literature for being Too Dark, I was, appropriately enough, taking part in a YA-centric book event at Klindts. 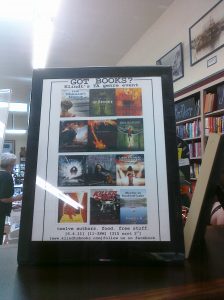 This amazing independent bookseller filled their store with twelve YA authors. They enlisted numerous zealously attentive teen volunteers to check in with us regularly to make sure we had everything we needed. The staff had read our books in advance. There was music by some of the authors, by a band fronted by a local librarian, by local kid and teen musicians. There were refreshments.

And did I mention we were on not one, but two marquees? 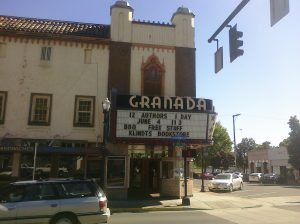 The readers came in droves. They bought books, yes. Some of them asked us about writing. Some of them told us what our books meant to them. Some of them read back covers, flipped through, looked up with shy smiles. 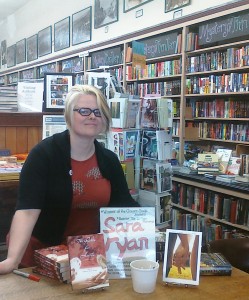 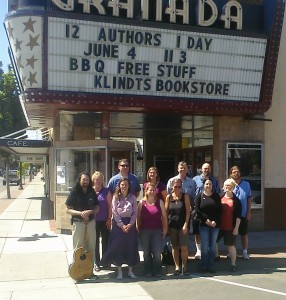 But as amazing as the day had been already, it got even better.

Some of us went out to the juvenile detention section of NORCOR. No photos from this part, obviously. We started with a panel discussion in front of the whole class, then broke into smaller groups.

Rosanne Parry and I were with three girls. I won’t tell you the stories they shared with us. I’ll tell you some authors they love.  Ellen Hopkins. Stephen King. Dean Koontz. They like drug books, to see characters struggling with addiction. They were smart and curious and funny, two of them starting to think about what they might do with their lives, the third not able, yet, to envision a future not dominated by the same issues that brought her inside. “But that’s kind of what I think can be great about books,” I said, trying not to be heavy-handed about it, but wanting to make the point — “It’s just, when you read, you can see more possibilities, right?”

June 5, 2011 By Sara
Quick guide to ALA for comics creators Sighted

What surprising thing did you learn about yourself in 2006?