For the first time since 2007, I took no part in the Stumptown Comics Fest, except by hanging out both evenings with folks who’d spent their days there.

It was still an eventful week.

Monday was the Oregon Book Awards. You’d think it would be less nerve-wracking to present an award than to be in contention for one — and okay, it was, actually — but it was not a stress-free occasion by any means. You want to do right by the folks in the category you’re presenting; enunciate their names and titles properly, then read the selection from the winning book with feeling but not, like, you know, totally over-the-top. I might initially have erred on the side of excessive seriousness. 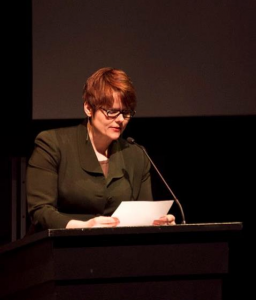 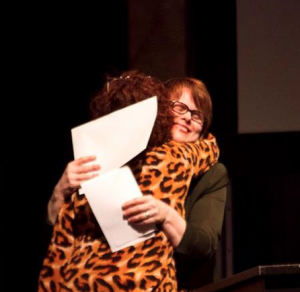 Super congratulations to winner Emily Whitman whom I am hugging in the photo above, and also to fabulous finalists Jen Violi, Lisa Schroeder, April Henry, and Heather Vogel Frederick.

(Tuesday featured a series of events that were not documented photographically, nor do I intend to describe them here, but they were also not stress-free.)

Wednesday was VERSELANDIA, the first ever all-Portland Public high schools poetry slam, and although I was initially all deer-in-the-headlights about having to give actual numerical scores, Olympics-style, I was very honored to be a judge along with Eirean Bradley, DLUX THE LIGHT, Leanne Grabel, and Turiya Autry. Here we are applauding the amazingly talented poets: 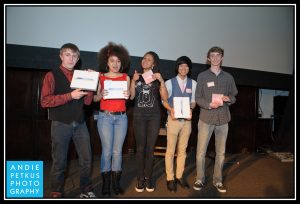 I would add links for all of them too, but so far I have only tracked down one of their Tumblrs, and maybe that already makes me a little bit of a creeper.

Thursday was Comics Underground, the documentation of which I will leave to the esteemed Christian Lipski. But here I am watching the action onstage while Steve grins  at photographer Paul Guinan:

We had a swell time.

But man. By Friday, it had already been a very long week and while it was extremely excellent in terms of literature appreciation, it was not so conducive to the production of same. So I elected to miss Stumptown in favor of holing up and increasing my wordcount. I am sorry not to have been there, but glad for the words that resulted.