Prince of Cats by Ron Wimberly 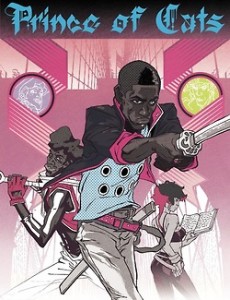 The first time I read Ron Wimberly’s Prince of Cats, I did not pay sufficient attention to the foreword. To make sure you don’t make the same mistake, permit me to quote it in its entirety:

So I’m your DJ tonight. My name is D-pi and boys and girls, have I got a treat for you. I’ll be cutting the B-side of Romeo and Juliet from Shakespeare’s greatest hits with a hot little piece of wax called “Gratuitous Ninja.” The outcome is Ninjaupera, post-modern absurdity for the critically pretentious or the laughably subversive. Either way, enjoy.

In other words, don’t go looking for the Romeo and Juliet story you know; D-pi is taking you somewhere else. Another quote:

In Brooklyn Babel, Where we lay our scene

Wimberly’s characters — some of whom are, yes, Capulets and Montagues — battle via graffiti, eloquent exchanges of insults, and swordfights. Fights can break out when one character scuffs — deliberately or not — another’s new kicks. The intrepid reporters of Duel-List magazine keep track of the fighters’ ever-shifting status, and more often than not, there’s blood on the dance floor. And the subway. And the roof.

I love the palette, the language, all the cultural phenomena Wimberly gets in the mix. And some of my favorite moments aren’t the action sequences — which are impressive — but single panels. Like this one, that plays with the Shakespearean milieu: 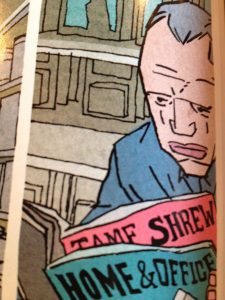 Or this one, girls walking out of school and hiking up their uniform skirts in unison: 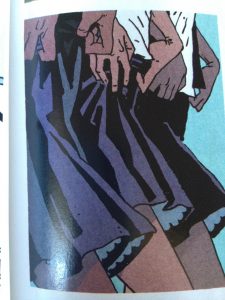 Or this one, Juliet leaning against the Streets of Blades machine while Tybalt plays, actual sword at his side: 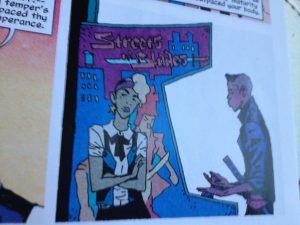 Or this one. Petruchio commenting on his piece: “See, a man caught in words can live forever.”

Shelve Wimberly’s Prince of Cats between Diaz’s The Brief Wondrous Life of Oscar Wao and Lethem’s Fortress of Solitude.

And if you want to know more about the book and Wimberly’s influences, David Brothers did a great interview with him at Comics Alliance.

July 8, 2013 By Sara
Portland is hotter than Chicago. Weird. Lady on the Beach by Norah Berg