I used two tools to come up with a basic overview of what-I-did-in-2014: my calendar, and the bookkeeping program I use to track my freelance work. A bit reductionist, but they do serve to more or less document what I was up to. 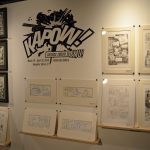 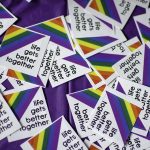 Syracuse University’s student-organized Life Gets Better Together conference, where I was on the keynote panel about the cultural climate for LGBT folks and taught a writing workshop.

University of Michigan’s Kids Read Comics in the Classroom preconference, another panel! And another opportunity to see old friends, better weather this time.

At Western Oregon University, all by myself this time, talking about Bad Houses with Shaun Huston’s Cultural Geography class. Favorite student response: “Today Sara Ryan came in and she seems pretty kick ass … She has an awesome vibe and spoke about the process of making Bad Houses with great enthusiasm.”

I was a guest at four comic conventions: Emerald City, Wondercon, Kids Read Comics, and the Rose City Comicon. 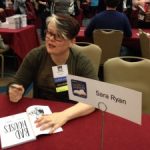 I was on yet another panel at YALSA’s Young Adult Literature Symposium, this one on YA Realness: what makes ‘contemporary YA’ feel true to readers? Also participated in the very exciting Book Blitz, where the above photo was taken.

And I taught a couple of workshops, one on comics writing, one with Rosanne Parry on writing with cultural responsiveness, at the Society of Children’s Book Writers & Illustrators Oregon conference. Also a writing workshop at the Ann Arbor District Library, and four comics writing workshops for teens at Columbus Metropolitan Library.

…but wait, did you actually write anything?

Yes I did: a more-than-usually-self-disclosing essay for an anthology, and a short comic featuring an extremely well-known character for another anthology. Neither has yet appeared but I will tell you when they do. And also other things, which are In Progress.

In 2015, so far I’m most looking forward to teaching at the Lambda Literary Foundation Retreat for Emerging LGBT Voices, being a special guest at the San Diego Comic-Con, and — needless to say — progressing on the things that are In Progress. Further bulletins as events warrant.