September 28th, 1997: I was on a train from Portland back to Ann Arbor. I’d just interviewed for a job. I’d done my first (and so far last) storytime. I read, among other things, Caps For Sale, a story featuring caps (as you might suspect) and monkeys. 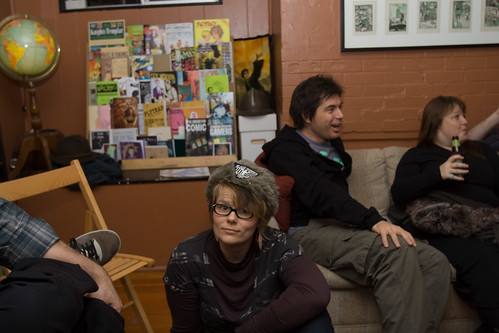 The next night, I take my one and only Stumptown photo, of the refrigerator downstairs at Cosmic Monkey. 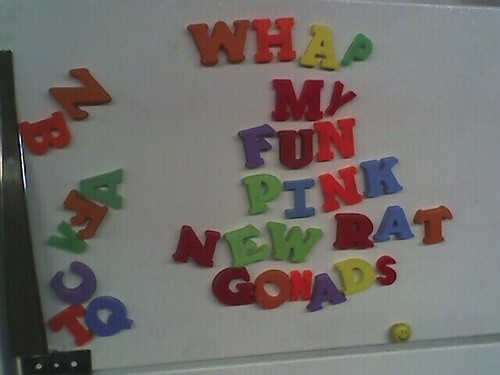 In 1997, I could count the Portland people I knew on the fingers of one hand.

In 2007, I need both hands and both feet just to get through all the members of the studio.

I’ve sat at a lot of tables at a lot of comic conventions since. I used to be notorious for bailing out. Sometimes I’d come back with a sandwich for Steve. Not always. (Sorry, man.)

Then I started writing comics. (Remember about vampirism?) These days, not only do I not leave the con, I often don’t even leave the table.

Everything I bought at Stumptown 2007 was from Dylan Meconis: some original art from Click (not to be confused with the multiple-author novel of the same name, which sounds cool, though I have not yet read it) and a super Shrinky-Dink necklace of a two-page comics spread, panels and word balloons only. Congratulations, Dylan: you’ve made an identity badge for comics writers.

It was 1994, not 1997, when the Offspring released “Come Out And Play (Keep ‘Em Separated),” but allow me a little artistic license with my ten-years-ago vs. today musings, because for the longest time, I tried so hard to keep ’em separated: librarian life, writer life — and it’s impossible. The library has a table at Stumptown. I didn’t work at it this year, but I have. Other library staff were at non-library tables. People who knew me from the library asked me library questions while I sat at my comics-writer table. I was on a panel about Comics in Libraries and I shifted between writer perspective and librarian perspective so many times I got a sort of mental whiplash. (It was nice to hear the library called “radical and anomalous,” though.) Both/and. Not either/or. You’d think I’d have figured that out sooner.

Two people asked me, “What themes do you usually write about?”

I think the question was code for: “Are there always queer girls and do they always make out?”

But I looked at everything on my table and said, “Relationships and performance.”

A few more things about Stumptown:

This was the first year for costumes. 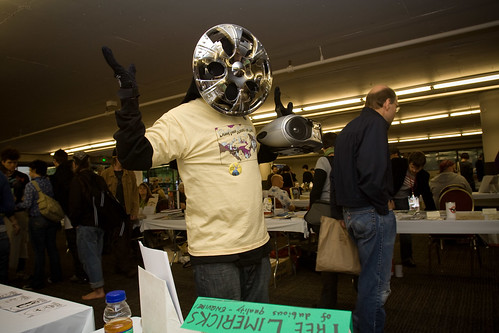 Spacious Chinese restaurants work well for the inevitable Gigantic Con Dinner, but you can never order enough Pepper Salted Pei Pa Tofu, because no one who hasn’t had it before thinks they’re going to like it, but then they totally do.

It was great to introduce friends to other friends. I had a good conversation with an exhibitor up from L.A., remembered how much I’d liked talking with her last year, and finally deployed the power of the Internet to learn her last name. She wants to move to Portland, it turns out.

October 1, 2007: I’m paying for breakfast, entirely in ones. The barista smiles, raises an eyebrow, and asks, “Are you moonlighting?”

Yes, actually. Have been for years.

I came for a job. I got a community. Thanks, everyone.

P.S. Because I didn’t remember to tag my previous Stumptown posts with News/Appearances (my lack of tagging skills is perhaps the subject of another post), I will tag this one and take this opportunity to let y’all know about the next couple places I’ll be: