Hey, everybody. It’s been a while.

You go away from easy Internet access for a week and somebody hacks your dang MySpace. For any of y’all who got bulletins from “me” alerting you to the latest horizontal hijinks of a young lady who I will not name, who is famous for being famous, please accept my sincere apologies. I’ve totally changed my password and reestablished ownership. I think.

It was a very bookish ambiguous winter holiday. I have just added to my obsessive LibraryThing catalog the following:

Some of them came from the several good used bookstores along US 101 between Lincoln City and Newport, one of which has this excellent poster: 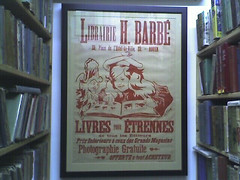 Two of them came from the Visitor Center at the Hatfield Marine Science Center, which I highly recommend. We also purchased a fine rubber octopus, learned a bit about Antarctic whale research, and I took a few pictures. Here’s one: 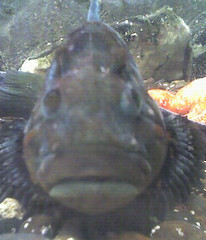 Some fish you don’t need to work at all to anthropomorphize.

Last but not least! The other thing I did while away from the ever-enticing Internet was to finish writing my story for the Comic Book Tattoo anthology, which a few of you may have heard about already — it’s coming out this summer from Image Comics, and all the stories are inspired by Tori Amos songs. I don’t think I’m allowed to say yet which song is mine, but I’m extremely psyched about the story and the project as a whole.