More tips on writing comics: what artists wish you wouldn’t do, part one

Writing comics has stayed on my mind since I wrote my last post, in part because I’m closing in on finishing the script for my upcoming graphic novel. And I’ve realized what has helped me the most as a comics writer: hanging out with cartoonists, listening to them complain about scripts.

So I thought I’d ask some artists for the advice they’d like to give novice comics writers, and share it here as a public service.

First up is Ron Randall, who says:

Please do not direct the artist to draw something “big, impressive, spectacular, or awesome.” Do not instruct the artist to “outdo himself,” or to “really impress me with this shot…” A capable and engaged artist will draw things well, whether instructed by the writer to do so or not. Vague, generic instructions like these are not helpful or “inspirational.” Quite the opposite. They are maddening and infuriating. Worse yet, they sound amateurish. If you want to get inspired work out of the artist, look at their past work or talk to them to determine where their strengths and enthusiasms are, and incorporate those elements into your script as much as possible. If you don’t know who the artist is before you write a script, it’s a safe bet they’ll be happy to see a story that isn’t laden with arbitrary details or structured like a TV episode– filled primarily with people walking and talking their way through abstract problems.  Remember– you are working in a collaborative and a VISUAL medium. You get the best out of a collaborator the way you get the best out of any relationship: by treating him/her with respect, and keeping their interests in mind, as well as your own.

One last shot– it’s better by far to have a character’s traits, temperament and abilities revealed by actions rather than dialog or description. (Thanks to Kurt Busiek for that one…). When you figure out how to do that, you’ll be on your way to becoming a writer. 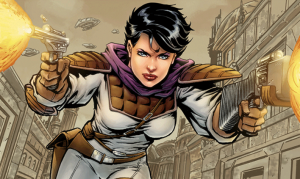 March 10, 2010 By Sara
Getting a robot to make you a sandwich and other tips for writing comics More tips on writing comics: what artists wish you wouldn't do, part two

Submitting a script when you don’t have an artist

On the power of anthems and projection