Have you read Jenny Davidson’s The Explosionist and Invisible Things? If you haven’t, I suggest you go do that and then come back because portions of this interview contain OMG SPOILERS!!!

Here, let me make it easy:

If you need more persuasion, let me tell you that the books take place in a world where Napoleon won, where the rationalism of the Enlightenment coexists with belief in the ability to communicate with the dead, and where a whip-smart girl like Sophie Hunter might look forward to a bright future in the elite IRYLNS, where young ladies learn how to efficiently and selflessly serve the men who run government and corporations and what, what do you mean that doesn’t sound like such a bright future?

All right, here we go! My questions are marked with SR, Jenny’s answers JD.

SR: You write in your Author’s Note that “if we really think about how history works, a world that split off more than a hundred years prior to the events of Invisible Things would have much less in common with our own world.” How did you decide what details to retain from ‘real’ history and what to change?

JD: My thoughts and understanding of the world are so thoroughly shaped by ‘real’ history that it would be a mind-bending experiment indeed to see how far I could depart from the universe we know – in a science-fictional sense, one is tempted to change the actual underlying rules of how things operate in the world! I wanted to keep the historical feel that comes from the presence of real known named historical figures, some of whom are doing much what they did in our world (Niels Bohr) and some of whom are doing something similar but different (Wittgenstein); if I were more of a purist, though, I probably would have made more of the characters up.

SR: I was struck by this line: “Mikael’s notion of the obligations of the guest-host relationship entwined the pair of them in a merciless web of mutual courtesies.” I know that you’ve written an academic book that investigates the “culture of politeness” in authors from Locke to Austen. Did your research for that book influence the way you present Mikael and Sophie’s relationship and the constraints under which it operates?

JD: I think it’s something I’ve always been interested in. The work of a novelist in many ways is closest, in terms of academic disciplines, to sociology of the sort that someone like Erving Goffman writes; sociologists and novelists are both interested in finding a language for documenting this sort of play of manners. I think that Austen is the supreme novelist of this sort of interaction; the precision of her observation and the originality of the language she develops to notate it continue to amaze me. But more generally, I do think that The Explosionist and Invisible Things take up a set of questions I began to explore in my academic book on politeness; I was interested there in the costs politeness exacts from the people most centrally expected to possess and perform it, and I felt after I’d written that book that I’d done as much as I could in an analytic vein with the topic, but that there were thoughts I was still struggling to articulate that could be better explored in the form of a novel.

SR: Had you worked out the details of Sophie’s family history when you wrote The Explosionist, or was that part of your process for Invisible Things?

JD: I had worked out a lot of things before I even started writing The Explosionist, but some of them changed! In fact very early on in The Explosionist is a scene where Sophie seems to see the ghost of a woman who looks a bit like her mother but seems to be a generation older. In my original imagination of Sophie’s family history, she always was the granddaughter of Alfred Nobel, but he was her mother’s father, not hers. It was only when I started writing Invisible Things that I realized that the whole thing would make much more sense – and allow me to give my readers a better understanding of some of the contradictions of Sophie’s Great-aunt Tabitha’s character – if it was Tabitha herself who had been romantically involved with Nobel.

SR: And speaking of process — can you say a little about your writing process? Do you work from an outline? Do you have a favorite writing program? Do you do any composing in longhand or do you do all your work on a computer? Do you have a preferred place to write?

JD: I don’t usually work from an outline, though I know I had a sheet of paper for The Explosionist that had boxes for each chapter and little bits of notes in it, and I also had a diagram I made when I was first working on Invisible Things to help me remember what strands of plot from the first book I needed to pick up again here. I have traditionally composed in longhand (both of these two novels were written that way); I have a strongly tactile relationship with writing implements, and in fact I remember getting rid of the pen and notebook I had bought specially to write Invisible Things in because they just didn’t feel right. It was a quite narrow-ruled little notebook, and a pen with a narrow nib (I especially like gel pens because they make you feel you’re laying down a physical trail of meaning on the page!); but the two things in conjunction were making me feel narrow and fretful and hemmed in. So I got a big sketchbook, very heavy nice paper with no lines, and a pair of very soft pencils – I scribbled the whole thing in huge sloppy writing with clouds of graphite in a sort of haze above the page.

(I’m writing my new novel straight onto the computer, though, partly because of the HORROR of the job of taking a full-length illegibly scrawled manuscript and typing it up and then correcting typos and sloppiness; I am a fast but highly inaccurate typist, and it’s a size of job I can’t tackle unless I have a week or 10 days pretty much free to deal with it.)

SR: Sophie is highly intelligent and analytical and also deeply self-conscious about how others see her. I know it’s a mistake to conflate protagonist and author, but did you draw on your own adolescence in creating Sophie?

JD: Yes! Sophie has a great deal in common with me, though she’s also got bits of other people I know and of literary characters and all the other bits and bobs that go to make up a character. I found Sophie quite easy to write, as a character, because of this overlap; and in fact though I am thirty-nine years old I still feel in many respects stuck in that emotional state of being a self-conscious fifteen-year-old.

SR: I find Sophie’s excitement about sweets to be a very endearing characteristic. Would you care to share a recipe for a cake or other dessert that Sophie would enjoy?

JD: I am not at home and do not have access to my recipes! But I will say that Sophie and I share an opinion that icing is the most important aspect of a cake, and I am certain that Sophie would like the kind of buttercream icing I make for cupcakes: basically the proportions can be varied depending on what you like, but use the whole box of confectioner’s sugar, put in about 2/3 of a stick of butter (I blend it in a Cuisinart, but if you soften the butter first you can use a regular hand-held mixer or a wooden spoon or what have you) and a bit of milk and a generous teaspoonful of vanilla. I prefer salted butter, but many people would say you should use unsalted. This can be flavored with chocolate (put bittersweet chocolate in the microwave to soften, then stir in) or cocoa or colored pink or blue or whatever you like; lemon or orange flavoring can also be nice, but really when it comes down to it I prefer a basic vanilla. 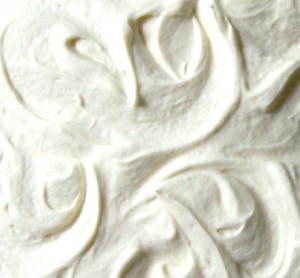 Everybody, enjoy The Explosionist and Invisible Things, possibly while also eating buttercream icing!

And somehow it got to be past the middle of November