As I’ve mentioned a few other times here lately, Randy Powell and I collaborated on a story for the Girl Meets Boy anthology edited by Kelly Milner Halls. And now we are collaborating on this interview about our story, “Launchpad to Neptune.” This is but one of many stops on the full-on Girl Meets Boy blog tour!

The title of “Launchpad to Neptune” comes from a comment G makes to S about a place they find themselves in — a clearing in the woods that feels like you could take off from it in a rocket. Have you been anywhere that evokes that sense of possibility?

Randy: Here’s my idea of a “launchpad to Neptune.”  First, the idea of a Vision Quest — a rite of passage where you go off to some place in the wilderness alone and camp there overnight (or for several nights) and have some sort of an “experience.” Such as see visions or hear voices or something. I’ve never done that, mainly because I have very inappropriate camping gear. But hey, I suppose it’s never too late to go on a Vision Quest and finally make that leap into adulthood. Second, it evokes a place of solitude where you can sit in nature and be silent and still. That’s something I do quite a bit and I value that a lot. Go out in nature and just listen to the silence. Preferably it’s raining and you can feel the rain on your face.

Sara: Picking up on what Randy said about solitude in nature — I’m a fan of walking on beaches in the winter. I like the quiet and the cold, and how you rarely see another person, but if you do, you almost always exchange a conspiratorial smile. You might not launch right then, but you could.

G likes the collection of beach glass and driftwood S had when they were kids, but no longer has by the time the story takes place. Do you collect anything? Have you ever abandoned a collection? If so, why?

Randy: I’ve always been envious of people who collect stuff — stuff that requires hunting and gathering natural things, found things. Beach glass is ideal. Sometimes I go walking at low tide on Puget Sound near my house and I used to find some pretty neat beach glass and bring it home and put it in my back yard, which I would take a picture of except they’re all buried in snow right now. But I gave up on the beach glass because I found I was spending all my time during those walks with my head bent looking down.  It gave me a sore neck. I’ve tried to collect other things. Comic books. Golf balls. Bottle caps. Pens. It all fell by the wayside. Now I just collect words and phrases and interesting word combinations.  And names. For instance the other day I came across someone with the last name Quitiquit. That would be a great name for a character in a sports story, but a little too contrived — too obvious an “aptonym.” 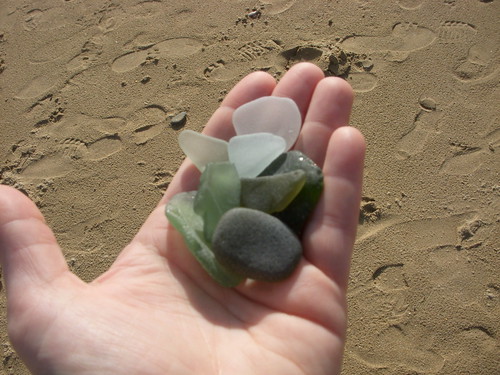 But I get what Randy means about always looking down — every so often when I’m scrutinizing the sand I force myself to remember that there is also an ocean I could be looking at.

The most notable collection I abandoned was probably my Smurfs. I had enough of them to people (or smurf?) a small village, each one carefully marked with my initials. I grew out of liking them right before a birthday, and of course I received a bunch of them. It provided me with a valuable lesson in feigning enthusiasm.

What was the experience of collaborating on the story like for you?

Randy: More fun than I thought it would be. Drinking coffee and brainstorming with somebody else is a lot more fun than doing that all by yourself. It was more like playing a game than writing.

Sara: I definitely agree, the exchange of ideas was fun and valuable. Also, Randy and I live in the Pacific Northwest where coffee is actually medically necessary to survive the sunless months and thus its preparation has achieved the status of art. So we were drinking especially delicious coffee.

A lot can happen in eleven years.

Book recommendations from the BGL retreat