Gone Home: what I loved and what I learned

I’m a compulsive reader. I’m less consistently engaged by movies and television, but there are certainly any number of films and shows I love. Over the past several years, though, I’ve become increasingly aware that there’s an entire type of narrative with which I haven’t been able to connect.

I glean things from time to time — for instance I understand, vaguely, that many folks in my social circle play, love, critique, passionately discuss, create fan art for, and are otherwise engaged with games like Bioshock, Mass Effect, and Dragon Age.

But by and large, I’ve never found games fun.

Back in the dark ages, my fervent enjoyment of Ms. Pac-Man (as much for its name as for the gameplay) always coexisted with anxiety and frustration (whether due to inadequate hand-eye coordination or lack of quarters).

More recently, playing games, like reading some mainstream comics, has seemed more like work than entertainment, requiring Talmudic-level knowledge of creators, techniques and game mechanics. Or I’ve thought playing games would be like middle school gym class, where I knew I’d struggle with activities that others found simple, intuitive, enjoyable.

Turns out I hadn’t found the right game. 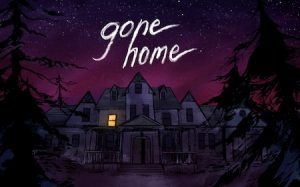 I wouldn’t have found it, either, if it hadn’t been for Carmen Maria Machado‘s thoughtful appreciation in the L.A. Review of Books, “Why Alice Munro Should Play ‘Gone Home‘: The Video Game As Story And Experience.” I bought Gone Home immediately after reading Machado’s piece, and played Gone Home, with only a few pauses, for the next several hours.

Anyone with more of a connection to the world of indie games than I have is, no doubt, not surprised. The game has been out since 2013. It’s won a lot of awards.

And anyone who knows me IRL will also not be surprised that the game with which I connected so strongly: 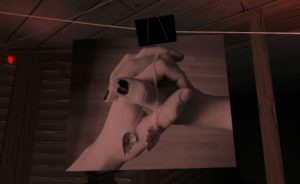 But even more than my delight in all the elements that felt tailor-made to delight me, what I appreciate most about Gone Home is how it subverts ideas about what even constitutes a story.

Received ideas about narrative are hard to escape. Conflict is everything. Raise the stakes. What does your protagonist want? What’s in the way of her getting it? What’s the through-line? What’s her arc? Who’s the Big Bad? Make it hurt!

Gone Home’s storytelling doesn’t work like that. You extrapolate from fragments. Relationships reveal themselves to you gradually. You discover that the Greenbriar family home, the “Psycho House,” both is and is not what it seems. And if an antagonist even exists, it’s, perhaps, simply the emotional and physical distance between the characters.

The Alice Munro quote about stories considered as houses that Machado includes in her piece about?Gone Home is certainly apt (go read it if you haven’t already). I thought of another, a favorite passage from Ursula Le Guin’s essay “The Carrier Bag Theory of Fiction”:

So, when I came to writing science-fiction novels, I came lugging this great heavy bag of stuff, my carrier bag full of wimps and klutzes, and tiny grains of things smaller than a mustard seed, and intricately woven nets which when laboriously unknotted are seen to contain one blue pebble, an imperturbably functioning chronometer telling the time on another world, and a mouse’s skull; full of beginnings without ends, of initiations, of losses, of transformations and translations, and far more tricks than conflicts, far fewer triumphs than snares and delusions; full of space ships that get stuck, missions that fail, and people who don’t understand.

There are a lot of stories inside the carrier bag of Gone Home’s house. And like Le Guin’s essay, they remind me that the ‘narrative trajectory’ is only one way to think about what stories are, or can be.

Adjusting to the dark